We explore the inner workings of DataFusion filter pushdown optimisation, and see what it takes to ship them to remote data sources.

We've recently released a new feature in Seafowl, allowing one to remotely query a variety of external data sources. Coincidentally, the feature is completely independent of Seafowl itself; anyone using DataFusion as a query engine framework can make use of it. In fact, to facilitate this, we've factored out the code to a stand-alone crate named datafusion-remote-tables!

In this blog post we'll touch on how this querying mechanism works. Specifically, we'll focus on how we achieve filter pushdown, a special optimisation reducing the amount of data needed to be transferred over the network. As it happens, this also serves as a great overview of some DataFusion internals as well as a couple of fundamental Rust concepts1 at the same time.

In order for a particular data source to become queryable in DataFusion, it needs to implement the TableProvider trait. It is an async_trait, so as to enable an asynchronous scan method, which is responsible for creating a physical plan for a particular query.

The scan method receives a number of useful parameters:

All of these represent an optimisation strategy for pruning the data closer to where it actually lives. In our remote table implementation of this trait we use all these arguments to re-construct a SQL query in a string form native to the corresponding remote data source and execute it2.

Importantly, an Expr is a DataFusion enum representing an arbitrary logical expression (and thus filters as well):

It is also recursive, as some of the variants contain structs that are themselves composed out of Expr:

while others (e.g. Column and ScalarValue) represent leaf nodes in the expression tree.

Just because WHERE and LIMIT clauses are used in a statement, doesn't mean they'll be passed as arguments to the scan function. This is ultimately controlled by another method in the TableProvider trait named supports_filter_pushdown.

During plan optimisation phase, DataFusion splits the whole WHERE clause into constituent Exprs separated by ANDs. Then it calls supports_filter_pushdown method for each Expr to find out the corresponding pushdown status:

The reason why the WHERE clause is broken up at the ANDs is for enabling granular pushdown: all individual conjunction components that are shippable can be pushed down independently of each other's pushdown status. This allows for reaping the performance benefits even when only a part of the whole WHERE clause is shippable, while retaining correctness.

Note that projection is said to be commutative with filters, meaning the order of their application (source vs destination) is not important (i.e. one trims down the columns, while the other trims down the rows returned). The implication of this is that projection always gets pushed down to scan, regardless of the filter pushdown status.

However, limit is not commutative with filters, as both prune rows according to different rules. Hence, limit is passed down to scan if and only if all filter expressions in a query are eligible for exact pushdown. Keep in mind that the potential reduction in the amount of data retrieved with these two parameters is anywhere between 0 and 100%, so the performance benefits can be very large.

Therefore, in order to make the most out of it, it pays off to be as diligent as possible in supports_filter_pushdown. We need to ensure that we can determine the shippability of each (part of each) expression in a query, and when needed translate it to the dialect of the remote data source.

This problem has already been encountered in the family of Postgres foreign data wrappers (FDWs). The usual approach there is to recursively walk the AST of the query, converting it piece-by-piece into remote-compatible SQL if possible, otherwise forego the filter pushdown.

Fortunately, DataFusion provides the primitives that suit our needs in the form of ExpressionVisitor trait. It employs the visitor pattern for walking the entire tree of an arbitrary Expr in a post-order manner. In particular, it provides two convenient methods for hooking custom actions. One is invoked just prior to visiting all the children of a given node (pre_visit), while the other is invoked once all the child nodes have been visited (post_visit). 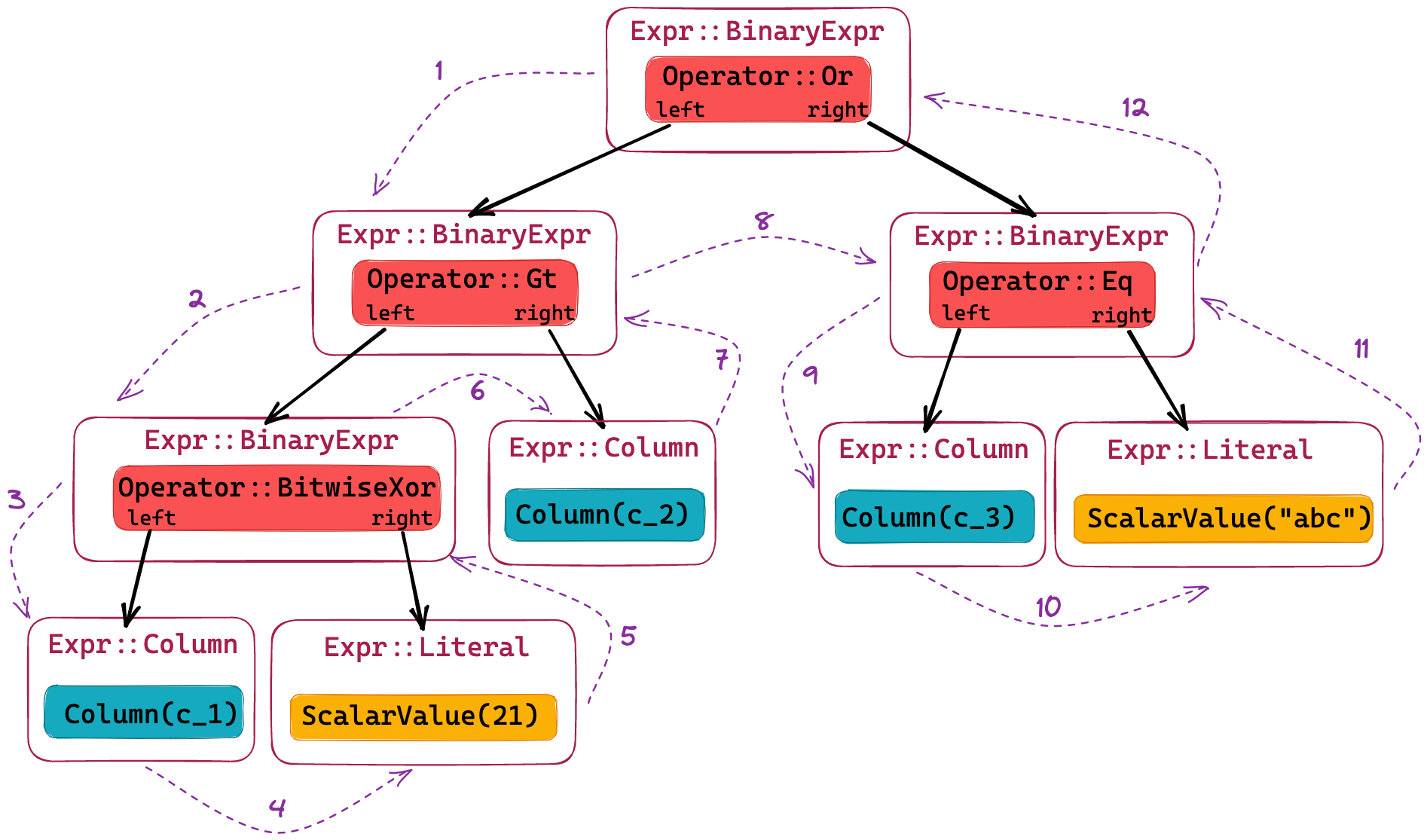 This should now clarify how we can utilise the two hooks in ExpressionVisitor trait for our purpose. On the one hand, we can check for the shippability of the expression, operator or data type of the current node in the pre_visit method. If it's not compatible with the remote there's no need to waste time visiting any of the children, so we can exit the visit immediately and inform DataFusion about this (i.e. flag the filter pushdown as Unsupported in supports_filter_pushdown).

On the other hand, if we do reach the post_visit method on a particular node it means that it (alongside all its children nodes) is shippable. In other words, there is a corresponding remote-compatible SQL string (and we should flag the filter pushdown as Exact in supports_filter_pushdown). Furthermore, this enables a bottom-up approach of generating the equivalent SQL efficiently.

Namely, we can't generate the SQL representation for a recursive node (in our case Expr::BinaryExprs) before knowing the SQL of its components. Therefore, we must first reach the leaf nodes (Expr::Column and Expr::Literal), which can be independently converted to SQL, and then progressively build the SQL up from there.

An ideal way to facilitate this is to use a stack. Simply push resulting SQL for each expression to the stack, and for any interpolation (recursive nodes) use the SQL from child nodes (i.e. pop from the stack). By the time we exit from post_visit of a root node, we will have a single element on the stack, representing the SQL of the entire expression.

Prior to implementing the ExpressionVisitor, we need to keep in mind one more requirement for our filter pushdown mechanism, and that is re-usable polymorphism. In other words, we want to have the same interface regardless of the remote source type, and re-use as much of it as possible. For start we aim to support PostgreSQL (whose dialect DataFusion is closest to), as well as MySQL and SQLite.

To achieve this let's first make a new trait, one that converts a leaf node or an operator to SQL for a particular data source:

Here we make sure to quote the identifier used in the column expression to handle any special characters properly (such as spaces). In addition, we enclose the string literals in single quotes, as well as convert the Operator enum to the default string representation (relying on the Display trait). The default trait implementation is perfectly adequate for Postgres:

However, the other two data sources require some changes. For instance, MySQL uses backticks to escape the identifiers, while the bitwise xor operator is denoted as ^ (and not # as in Postgres, which op.to_string() returns):

On the other hand, SQLite doesn't have a dedicated bitwise xor operator4:

Now, in order to actually employ our filter conversion we need to implement the DataFusion's ExpressionVisitor. Note that the Rust's usual orphan rules apply here: when implementing a trait for some type at least one of them needs to be defined locally (in the current crate). In our case however we go one step ahead, as we want to implement the ExpressionVisitor trait for any type that also implements the FilterPushdownConverter trait. This would ensure that a single implementation covers all remote types (Postgres, MySQL, SQLite).

The naive way to go about this is to try the following definition:

However, rustc will quickly dissuade you from this approach, as this can also lead to violating the orphan rule:

In other words, you could inadvertently implement FilterPushdownConverter for some foreign type that already implements ExpressionVisitor, at which point there would be a conflict. Thankfully, the error message is very helpful and suggests the proper course of action. Namely, we must use a local struct in the definition instead. This works well with our intention of keeping a stack of converted SQL expression during the visit:

Finally, we can go ahead and implement the two visitor methods:

Nothing fancy here, all we use the pre_visit method for is to bail out of the whole visit as soon as we detect a node that is not shippable. The meat of the implementation is in the post_visit method:

Again, the leaf nodes are simply converted to the equivalent SQL using our FilterPushdownConverter trait and pushed to the stack. As for the binary expression, we first pop two items from the stack, corresponding to right and left sub-expression SQL, and then interpolate them with the operator. In principle, since the Expr has an implicit operator precedence, we need to convert it to an explicit one using parenthesis if the left/right sub-expression is also a BinaryExpr of lower operator precedence, but we omit that here for the sake of brevity.

Putting it all together

Lastly, in order to make the full trip from a Expr to a SQL string we can define a generic helper function, where we set off a visit starting at the root expression, and then extract the final SQL representation:

For our example expression from above, the resulting PostgreSQL statement is:

while the MySQL output is:

As for SQLite, an error gets thrown since the conversion of the bitwise xor operator is not supported. As mentioned, in such cases a bare SELECT without the WHERE clause would get pushed down, while the desired filtration is then achieved afterwards. Had there been an AND instead of an OR in our query however, DataFusion would have broken the WHERE clause into two expressions, and the second one ("c_3" = 'abc') would have been pushed down.

We hope this exploratory blog post has intrigued you enough to dig into the DataFusion framework (and perhaps Seafowl too). On our side, we aim to keep expanding the surface area of shippable filter expressions as well as supported remotes in the datafusion-remote-tables crate, so if you're already using DataFusion you may find it handy.

A deep dive into how we designed Seafowl's REST API to be HTTP cache and CDN friendly, including some discussion of ETags and other HTTP cache mechanics.
Read more
Feb 4, 2022 ·By Marko Grujić
15 min read

We recently implemented support for aggregation and grouping pushdown in the Multicorn FDW. In this post, we'll demonstrate it on a simple toy example and discuss how PostgreSQL aggregation pushdown works in general.
Read more
Previous
Next

Splitgraph Limited, registered in England and Wales No. 11657324